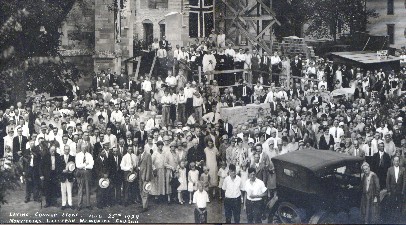 Mindekirken was founded in 1922, in a world changed by W.W.I. The elusiveness of peace helped turn the country inward, resulting in a great emphasis on all to be 100% American. Foreign language churches were rapidly converting to English-only services. However, there were those who saw the need to preserve their heritage, especially in their place of worship.

In the fall and winter of 1921,Rev. C.J. Eastvold, President of the Southeast district of the newly formed Norwegian Lutheran Church in America, asked 6 men and 1 woman to help form a Lutheran congregation providing services in Norwegian for as long as anyone would hear and understand it. On January 9, 1922 the congregation was formed with 22 charter members.

After several temporary locations, the cornerstone of our present church was laid in 1929. The dedication took place on May 4, 1930 with much fanfare and a large crowd overflowing the church. The official name of Den Norske Lutherske Mindekirke was adopted at about this time.

Difficult days came with the Depression. Bonds had been sold to build the church and as the economic situation worsened, making payments became all but impossible. After much time and effort, Mindekirken's pastor at that time, Rev. Rasmussen, was able to arrange to pay off the bonds at a reduced rate with a loan from the Sons of Norway. 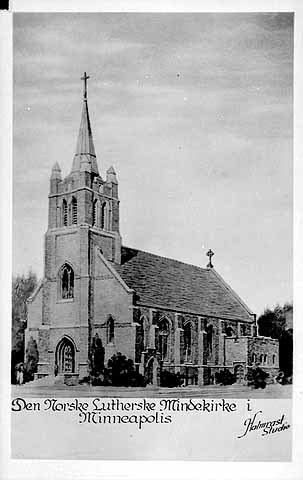 Even at the beginning cultural activities were a natural extension of the congregation. Women's groups were organized early and have continuously sponsored events to support missions and the congregation. These continue today in several popular events surrounding food and crafts and fellowship that are well attended by those interested in the Norwegian heritage ties to be found at Mindekirken.

Over time Mindekirken has continued as a gathering place for people who wish to celebrate their Norwegian and Scandinavian cultural ties in a Lutheran setting. Today the church also serves as a link between the Midwest and Norway, and we are visited by any number of Norwegian dignitaries throughout the year, especially on Syttende Mai and during the Christmas season.

Mindekirken has also developed a reputation for its music programs, including The Leiv Eriksson Festival in October, which features Norwegian artists working in a variety of media, particularly music.

Mindekirken remains true to its original mission as a living church in Norwegian, but has become so much more to those who belong and visit by being a lasting and tangible link to their past and current cultural identity, as well as being a guide in their spiritual lives.

The Norwegian Lutheran Memorial Church was built in 1929 in commemoration of Norwegian pioneers to America at 10th Ave and 21st Street Minneapolis at a cost of $173,000.

It is a rectangular-shaped building made of grey Indiana Limestone, designed after northern Norwegian churches, but having an arch-shaped roof of slate-slab, with the steeple at the south end.   Within this steeple are a set of chimes and a church bell. 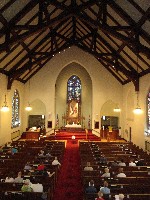 Entering the church at the south entrance, which is also the main entrance, and after passing through the front vestibule into the sanctuary, one's attention is immediately attracted to the beautiful stained glass windows and the altar painting "He Is Risen".

Upon closer examination the stained glass windows reveal the story of Christ, beginning with the Angel proclaimation and ending with the risen Christ's revelation to His Apostles. Two stained-glass windows in the balcony above the main entrance have the pictures of Martin Luther, Olaf the Hellige and Hans Nilsen Hauge with beautiful backgrounds designed in colors of purple, red and green.

The altar painting "He Is Risen" was a gift of Chris Brodahl, who was the church treasurer and one of the founders of the church.  It was painted by August Klagstad, Minneapolis painter, and is a reproduction of a noted church painting in Molde, Norway by Axel Ender.

An addition was built on the west end to include an elevator and provide much needed office and classroom space.  It was dedicated in the year 2000.

Mindekirken is called to share the Gospel of Jesus Christ with all people, empowering service to others.
Mindekirken practices its ministry through Norwegian traditions, culture, and language.